Roman Polanski was more right than he knew he said that films which end unhappily stick with us longer than the upbeat movies, for we spend much of our time afterward trying to figure out how/why things turned out so poorly, and what (if anything) it all means. In the aftermath of the Manson murders, Polanski doubtless spent most of his time wondering why his pregnant wife and her friends were butchered, which may have been the reason Polanski chose Shakespeare’s bloody spectacle MACBETH as his next project; what better vehicle is there than Macbeth’s despairing view that life is “full of sound and fury and signifying nothing” to look for meaning within the meaningless?

Indeed, unlike the powerless figures in Greek tragedies, Shakespeare mined his tragedies from the actions and inactions of his characters; the line from JULIUS CAESAR about our faults lying within ourselves might the closest thing to a thesis statement Mr. Shakespeare penned for his entire oeuvre.

Recently, I re watched THE LAST PICTURE SHOW and, aside from how incredibly moving and flawlessly crafted this film remains, after it was over, I began living Polanski’s prophecy, and kept asking myself “What is this film about? Why is everyone in it so damn miserable???”

To be sure, Peter Bogdanovich and Larry McMurtry do a fine job in the screenplay (adapted from McMurtry’s novel) of sharply drawing all the characters in the film’s dying little town; sex is plentiful but love is rare for these folks, jobs are mundane, so it’s easy to see why they’re so unhappy, but all I could wonder was why no one in the story does much about it. It’s really my fault for trying to find such a simplistic answer, because life rarely works out in neatly, and the best fiction shouldn’t offer easy answers.

The elegiac melancholy suffused throughout the movie belies, or maybe it imbues, the characters’ constant search for relief from their perpetual malaise. The way Bogdanovich directed the film, shooting it not just in black and white, but also with the kind of wide angle, deep focus photography common to films of the past, but filled at the same time with a sexual frankness, and a downbeat tone, which films of the 40s and 50s never had, make this movie both a celebration and criticism of films from yesteryear, and this boxes within boxes construction is part of what gives this film added power in revisiting it. But also, of course, the terminal melancholy of these lonely souls is what haunts us.

Each of the people in THE LAST PICTURE SHOW take their turns ending up in predicaments they never could’ve anticipated, and if that isn’t a recipe for how life works, I’m not sure what is. Peter Bogdanovich himself ended up in unforeseen places: after the thunderous success of this film in 1971, and his two succeeding movies (WHAT’S UP, DOC? In 1972, and PAPER MOON in 1973), he suffered some professional setbacks before facing a horrific personal tragedy in 1980 when his then-girlfriend Dorothy Stratten was brutally murdered by her estranged husband. Bogdanovich, in turn, took full financial control of the movie he’d directed which featured Stratten in a lead role, 1981’s wonderful romantic comedy THEY ALL LAUGHED, and the film’s poor reception broke him in every way. 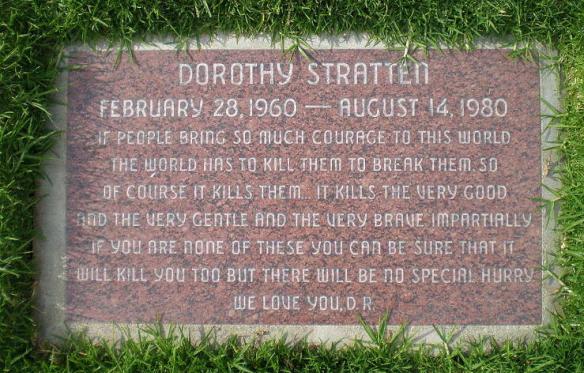 All these vicissitudes are well-chronicled in the 2015 documentary ONE DAY SINCE YESTERDAY, which took its title from a song Bogdanovich co-wrote for his comic valentine, which in turn was taken from something Dorothy Stratten had written to him the day after their first romantic evening together. The song’s lyrics, about forbidden fruit being sweetest, are doubly wrenching given what that love affair led to (“Emotions are terrific because nobody can help how they feel,” John Ritter’s lovesick detective tells Stratten’s character in an equally poignant moment in THEY ALL LAUGHED).

It’s often irresistible for people to seek out hints of autobiography in fiction, and Bogdanovich has said THEY ALL LAUGHED is the film closest to him (although THE LAST PICTURE SHOW will probably remain his best-known work, it had roots of autobiography for author Larry McMurtry, not the director).

In the end, though such matters are irrelevant; whether it’s the light-hearted, breezy romance the detectives find in THEY ALL LAUGHED, or Sam the Lion’s recollection of a brief affair which lit a dark corner of his life in PICTURE SHOW, all that matters is how such moments resonate with us, and the perspective we receive on all the joys and pains still closer than one day since yesterday.